The Massey-Harris company was formed in 1891. It was the combination of Massey Manufacturing Company of Toronto and A. Harris Son & Company Ltd., both of Ontario, Canada. Both of these companies had on their own been industry leaders in the production of implements.

After purchasing the J.I. Case Plow Works in 1928, well known for their production of the Wallis tractor, they were thrust into the tractor business. They introduced the 12-20 model tractor in 1929. This tractor was the basis for the "Pacemaker" which was first produced in 1936. The "Challenger" was their first row-crop tractor. Both models were available on steel or with rubber tires.

Massey-Harris continued to produce a popular line of tractors in several different models. Massey-Harris merged with Harry Ferguson in 1953 to form the "Massey-Ferguson" company. 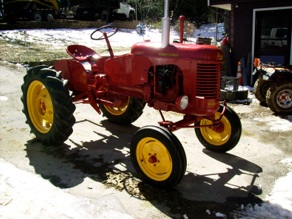